Randy Webb shares about his favorite photographer, Gordon Sparks, and how his work inspired him in his journey to become an artist. 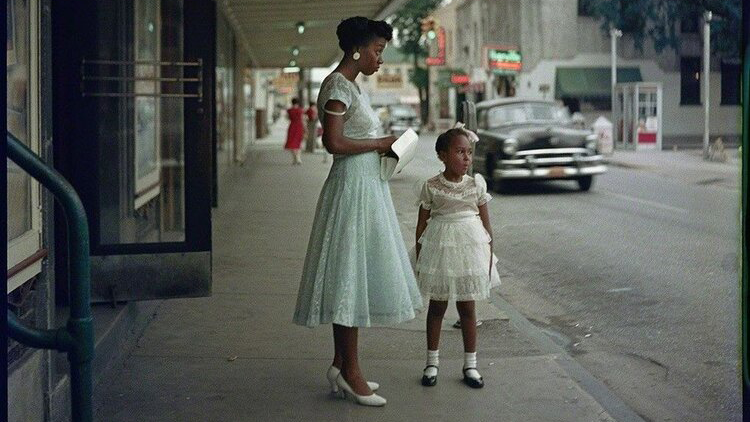 My photography obsession started when I was a kid and continues today. I shoot large format film and develop it myself. I collect old photographs from estate sales and flea markets, and I even own some original glass plate photos of Mt Vernon from the 1800s.

Through years of collecting and shooting photography, I have developed a long list of favorites. If you forced me to rank my favorite photographs and photographers, first place on both lists would have one person in common. Gordon Parks.

I first saw Gordon Parks’ photography on exhibit when I was young. I was drawn to this particular photo, and I stared at it endlessly.

I found the lady in her pretty dress to be stunning. The little girl (who was much closer to my age at the time) was also cute and dressed beautifully. The colors, the car, the framing, everything about the photo stopped me in my tracks. It was the first time I remember seeing documentary photography displayed as art. I was used to seeing portraits and staged photos, but this picture made me feel like I was there.

It wasn’t until I saw the photo again as a young adult that I understood its significance. I remember pointing it out in a book at the library and starting to exclaim, “I LOVE this….” But I’m not sure if the word “photo” ever came out of my mouth. I was stunned again but for different reasons this time. I had been too young to understand the neon sign's significance the first time I saw the picture. Do you know how much work it takes to make a neon sign, especially 70 years ago? Who puts that kind of effort into creating division?

In the years between the first and second times I saw this photograph, I lived in a predominantly African American city and attended a school where I was in the minority. Being there helped me understand the difference between our experiences. I learned to play blues music from men and women who had also lived the stories of Parks' photos. I remember asking one musician why he played a certain chord with a different hand position than everyone else, and I've never forgotten his answer.

“In the late 50’s, I was walking by a gas station, and a white woman in the parking lot said I was staring at her. A couple of customers and an employee grabbed me and stomped me for it. I ain’t been able to turn this finger right since.”

He said it so nonchalantly, with so little concern or anger. It still bothers me. He said, "stomped me," as if it was just a normal thing. How could that be "normal"?

I have seen Park’s work in person several times over the years. Whenever a museum within driving distance shows his work, I grab a friend and drag them along. Their reactions are similar to mine. It's the "normal" things that bother them deeply. How could that sign be “normal”. Hollywood tries to tell the stories of that time, but fancy studio lighting and dramatic acting never capture the reality of it all. It seems distant. It feels far off. But Park’s photos feel real because they are real.

Gordon Parks' ability to capture beauty and absurdity in "normal" situations is beautiful and painful to consider. I'm grateful for his influence on my life and his reminder that we should all keep our eyes open. A lot has changed, but in my city and my profession, we still accept things as "normal" that aren't and never should be. We would all benefit from a little time looking at the world through Gordon Parks' lens and then continue working together to create a new and better “normal.”